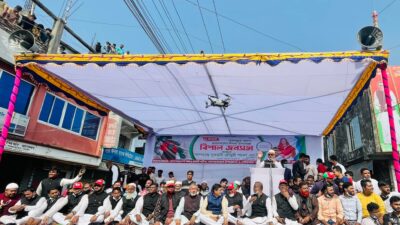 Alhaj Nurunnabi Chowdhury Shaon, Member of Parliament for Bhola-3 (Lalmohan-Tajumuddin) constituency, said that the father of the nation had fought for the liberation of the Bengali nation from the shackles of subjugation for 24 long years. For the undisputed leader of the Bengali nation, Father of the Nation Bangabandhu Sheikh Mujibur Rahman, a state called Bangladesh has emerged in the heart of the world.

Now, under the leadership of his daughter, the current Prime Minister Sheikh Hasina, Bangladesh has become a role model for development in the world. Another project worth Tk 1,950 crore has already been taken up to prevent river erosion in Lalmohan and Tajumuddin. In fact, the Awami League in power has repeatedly moved towards the development of the country.

MP Shaon made the remarks while addressing a public meeting organized by Lalmohan Upazila and Municipality Awami League on the occasion of Bangabandhu’s Homecoming Day at Lalmohan Muktijoddha Avenue in Bhola on Tuesday noon.

He further said that the military government of Pakistan had repeatedly wanted to assassinate Bangabandhu while he was imprisoned in Karachi. When Father of the Nation Bangabandhu Sheikh Mujibur Rahman returned to the country on January 10, 1972 after his release from prison, people all over the world were waiting for this time. With the return of Bangabandhu, the independence of the Bengali nation came to an end.

He further said that after the assassination of Bangabandhu in his own family on 15 August 1975, the conspirators wanted to make the country empty of talent. From behind the scenes, Major Zia stabbed four national leaders to death. Bangabandhu’s killers have tarnished the nation by giving jobs in foreign embassies.

His daughter Prime Minister Sheikh Hasina is working tirelessly to realize the dream of the father of the nation. Having been in charge of running the state for three times in a row, our country is now a role model of development in the world.